Shia, the demon who wears white.

Pita-Ten is my favourite manga and I adore Shia! Her costume is very simple, but she was my favourite character in the series and I was happy to finally cosplay her and represent this wonderful series somehow. If you haven’t heard of it, I highly recommend the manga. 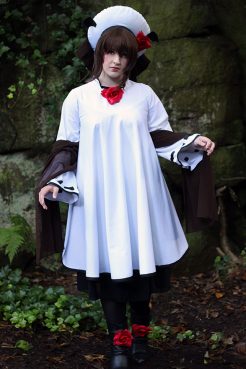 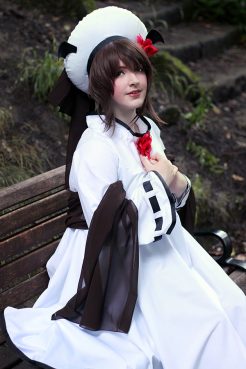 Construction Notes:
Shia is quite a plain character to look at, but I really love her. She was one of the top characters on my bucket list for a long time! I bought the roses back in 2006 intending to make her for a group. I’d still love to do a Pita-Ten group one day!

Depending on references her design can vary. I decided to make the main costume from drill with georgette and chiffon for a soft, dreamy look, reminiscent of the manga art, rather than the flat colours of the anime.

The wig is reused from Anise Tatlin, a Brown Twin Clip Curl Wig from CosplayWig. I thinned the fringe and trimmed around the face a little. Because of the hat, the clip ons are not used but it’s nice to have the option to wear it with or without!

The hat is made the same way I made the hat for Sumomo, using Fosshape and batting. The Fosshape was cut as two large circles for the front and back, with a hole cut for my head to fit into. Each circle was heated over a large oval mould to create the curve at the edges. Once each half was heated, they were sewn together along the edges and then covered with batting to pad the shape.

The body of the hat was then covered with white drill, edged with black grosgrain ribbon around the opening. The inside is padded with stuffing. It was finished with small faux leather wings, a rose and a large brown chiffon bow on the back. The bow was starched to give it extra body and to help it stand away from the hat. Against the references, the hat is a bit too round so I’d like to remake it.. but even as it is, I like how it looks with the rest of the costume.

The dress is made from white drill, trimmed with black grosgrain ribbon. It was based on a “tent dress” pattern, adapted to have a rounded yoke at the top for extra volume. The edge of the white dress has horsehair braid hidden inside the black trim for extra volume. The sleeves have black grosgrain ribbon fed around the cuffs through buttonholes and they are edged with armature wire. There is a gathered layer of black georgette attached at the yoke for the long slip underneath.

The sash is made from brown chiffon, matching the bow on the hat. Each panel was finished with an overlocked rolled hem for a clean edge. When the costume is worn, the sash is pinned to the back of the dress.

The tights were bought.

The boots were bought and modified to match her design – they were gathered slightly down the front and finished with roses pinned at the ankle. 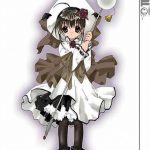 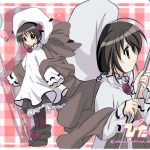 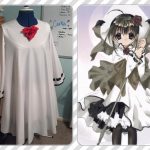 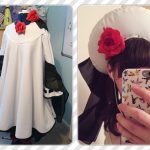